Geoffrey took home leave in the summer of 1939, having been in the tropical regions for more than two years.  He was 24, experienced in the ways of colonial Africa, and coming home to a sleepy England where Neville Chamberlain was having meetings with the Nazis to negotiate ‘peace in our time’.  It must have been a strange thing, coming back to live with his parents in Faversham, even now just an ordinary market town surrounded by countryside, where hops and apples are the main produce. And bricks, although I think the brickyards have gone now.

He went to see his old maths teacher, Mr Hutchinson. It might have been because they had always got on well, and he was probably updating him on his career, since Mr Hutchinson had been one of the sponsors on Geoffrey’s original application to Imperial Airways. Then again, Mr Hutchinson did have a considerable number of daughters, many of whom still lived at home.  He found that Mabel, the fourth oldest, was engaged to David, who eventually became a teacher (although he may have been in the services at the time), and the youngest three girls (Mollie, Peggie, Pattie and their little brother John) were still footloose and fancy free, although Mollie (whose real name was Frances), was up in London, nursing at the Middlesex Hospital. 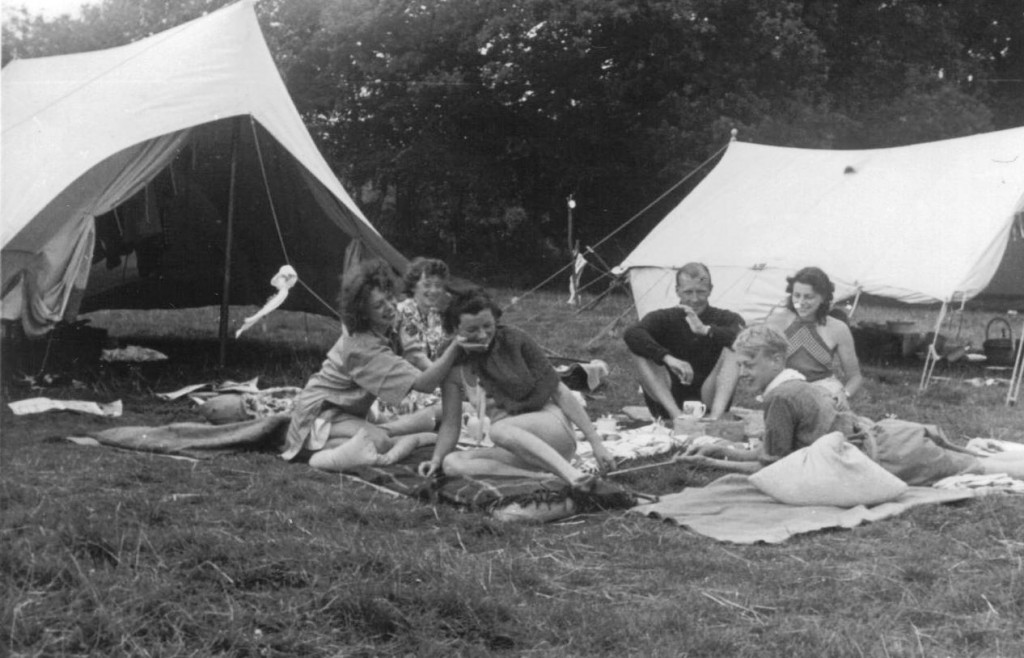 Mabel was organising a camping holiday, and she decided that Geoffrey was coming too, especially since he had acquired a car for the duration, and that meant they’d have two.

The family rumour is that Geoffrey had dated Pat, who was his own age or possibly a year younger, when they were at school.  Mollie, on hearing that Geoffrey was coming, was rumoured to have said “Oh, no, not him.”

Fortunately for me, they decided that the other was not too bad after all.  As Geoffrey says in the book, he enjoyed her company, and hoped she didn’t find his so terrible.

It turned out that war was declared when they were still on this camping trip, so they packed up to go back to their various posts.  Luckily for Geoffrey, who by now seemed to have been pretty well smitten, his posting to Imperial Airways’ evacuated HQ in Bristol was short-lived, and he was sent back to London for a few months to open up the brand new London air terminal.  I once asked him what it was like during the phoney war, and he just said they carried on as normal, always wondering what was going to happen next, but getting used to ration books and plans for attacks, and that sort of thing.  Mollie worked her nursing shifts, and they’d see each other whenever his own work (also shift based – he has tales of booking passengers in at the air-terminal by torchlight) allowed.

Then he was posted back to Cairo, which was to become the key to the communications between the Empire as the European routes were cut.  How he and Mollie got together to get married is another story, but I remember a passing comment of one of my aunts many years later, maybe in the 1980s, that “they had to wait all that time because of the 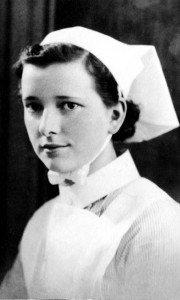 It was when I was watching Atonement, the film of the Ian McEwen novel, with Keira Knightley playing the nurse during the time of the Dunkirk evacuation (May 1940), that I had a terrible shock.  The nurse uniform, and the depiction of the hospital, suggested it was all modelled on the Middlesex, although it is supposed to be St Thomas’s, and the interior scenes were filmed at University College Hospital (all in London, ref. wikipedia).  Did my mother have to cope with all the horror of those wounded soldiers crammed into the corridors and wards of the hospital as it was shown in the film?

Actually, no, maybe the headgear isn’t the same. Each hospital had its own style.  I bet the interiors were much the same, though, as nothing much had changed by the 1980s.