My visit to the Croydon Airport Museum last month enabled me to understand better the other airplanes that my father travelled on and photographed.

This handsome beast is the HP42, which Geoffrey always called the Hannibal or the Heracles, and said came in two versions, one modified for altitude – since the Rift Valley in Africa means landing and take-off is at altitude and more powerful engines are required.

According to Ian Walker, Chairman of the Croydon Airport Society, there were only eight HP42s in service – four ‘normal’ ones and four ‘enhanced’ ones, and the normal ones did Europe, and the others did Africa and Asia.  So whilst Geoffrey was right about the two types, it was to do with the range as well as the power to operate at altitude.  The name thing is the oddity, though, since I have seen photographs of Hannibal, Heracles, and Hengist at Croydon, so his assertion that the two types were named Hannibal and Heracles seems erroneous.

I’d like to find out the names of the others!

Meanwhile there were also Atalantas operational in Africa – including the one in the noonday sun at Mbeya.

Geoffrey went down from Nairobi to Lindi with the local flying company, Wilson Airways, probably in a De Havilland Moth, and he describes circling round and the pilot deciding to land on the beach. 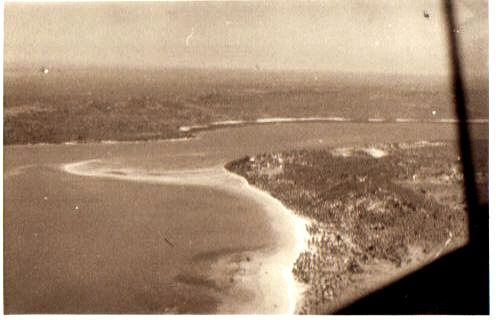 The pictures he took of Mount Kilimanjaro might be taken from the Moth, but could possibly have been an HP42.  Now I know how big those were, though, I suspect it was a Moth!