You can pre-order it at Smashwords already, and it will be available to pre-order at B&N and iTunes before the end of the month (probably from 22nd August).

The standard price is $4.99, but there’s a half-price offer on Smashwords, (until 8th September) using code LV58Q. 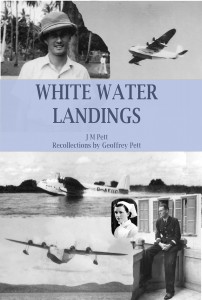 The romance of pre-war air travel meets the romance of a man and a woman kept apart by war in this memoir of a young man and his career in Africa with Imperial Airways.

White Water Landings – a view of the Imperial Airways Africa service from the ground – covers intriguing details of the Empire Flying Boat service – from the commissioning of the plane Centaurus to the indiscretions of the passengers, from the dangers of a herd of buffalo at night to the bravery of exiles waiting for transfer via Khartoum and Lagos up to London.

Also available for kindle, in paperback and as a hardcover book.